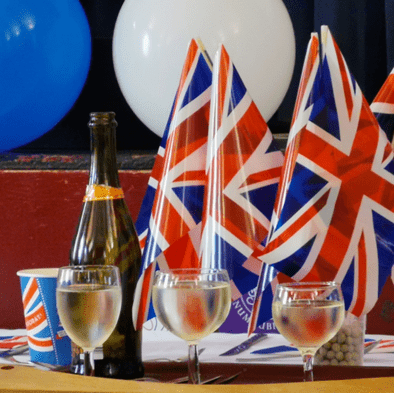 Over £13,000 was awarded to local community groups and organisations across the district to help fund projects and events held in celebration of The Queen’s Jubilee.

The council agreed to allocate funding from the authority’s Community Grants Scheme to pay for special Jubilee grants of up to £500 per project.

28 projects across the district successfully applied for funding, which was matched by the organisation.

Funding received by Ashburnham & Penhurst Parish Council ensured their celebrations including a barn dance, community bring and share picnic and boundary walk were a great success.

Battle Medieval Mysteries CIC used their grant to build a Platinum Giant Queen who took centre stage in a parade through Battle where she danced, waved and entertained the crowds. The Giant Queen will be seen again later in the year as she has been invited to take part in the Staplecross bonfire procession.

Battle Town Council’s grant assisted in the purchase and installation of a beacon, which was lit for the first time on June 2 as part of the Jubilee Beacons event which saw thousands of beacons lit across the UK and the Commonwealth.

The Friends of Little Common erected a giant platinum crown on the Little Common roundabout with a large, illuminated number 70 and lighting in the trees, while Pett Parish Council used their Jubilee grant towards a board illustrating a circular walk around the parish to be known as the Jubilee Way.

As part of Northiam’s Jubilee weekend celebrations, the Conservation Society hosted a ceremony and tea party to announce the opening of the village’s new orchard and Jubilee Nuttery. Three picnic benches have been installed across the site alongside an information board, giving the public information on the site and the trees.

Cllr Susan Prochak MBE, Chair of the Community Grants Panel, said: “The council is delighted to have been able to support the Platinum Jubilee celebrations of so many community groups, voluntary organisations and parishes across the district.

“Residents and visitors alike were treated so some fabulous events in June and it was wonderful to see everyone coming together to celebrate the magnificent occasion of the Queen’s Platinum Jubilee.”

More information on the events and celebrations that were held across Rother can be found on the council’s website on the Queen’s Platinum Jubilee Grant scheme pages.